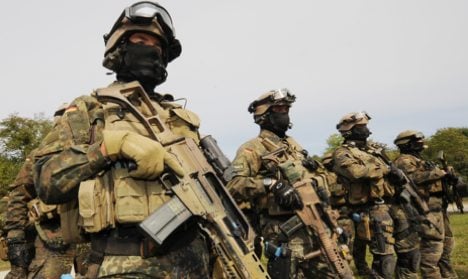 According to the German media, a inquiry into the bombing issued by NATO states that “the mission was mainly initiated and facilitated by Task Force 47,” which is a special military unit made up of elite Kommando Spezialkräfte commandos and regular army soldiers.

Der Spiegel reported that NATO found Task Force 47 had an unusually high number of KSK members working on or near the base close to the scene of the bombing.

This apparently explains why Colonel Georg Klein, who ordered the bombing, was able to ignore NATO procedure in carrying out the strike. The report says that Klein “isolated himself from the system of mutual control and collective responsibility.”

Der Spiegel said that NATO’s report makes clear that Klein knew at least one innocent civilian was with the tankers when he ordered the strike – an informant on the ground told him that one of the kidnapped drivers of the hijacked trucks was still alive and at the scene. Task Force 47’s own translator testified this to NATO investigators.

The report says that the US pilots flying the bombers asked the Germans where the kidnapped drivers were, but were told by Klein’s forward air controller that there was no information.

One of the two US pilots is said to have told the NATO investigators that he would not have used his weapons if he had known that one of the kidnapped drivers was on the scene.

The news weekly Die Zeit also reported that the airstrike was one of a series ordered by Task Force 47 on Afghan targets, and that an unusually large number of KSK forces were stationed on or near the camp at the time of the bombing.

The KSK is said to consist of up to 1,200 men, 240 of whom are currently active. Around 60 were said to be near the site of the bombing. According to Die Zeit, the KSK typically works in small teams of four men, who observe homesteads in the Afghan countryside to find Taliban leaders. The fact that so many were in the region suggests that a larger mission was under way there.

Rainer Arnold, representative of the Social Democratic Party on the parliamentary defence committee said, “The KSK does nothing without the agreement of military headquarters in Potsdam,” and that it is covered by NATO’s Isaf mandate in Afghanistan.

The defence committee is currently trying to find out what role the KSK played in the airstrike, which NATO estimates killed up to 142 people, including scores of civilians.