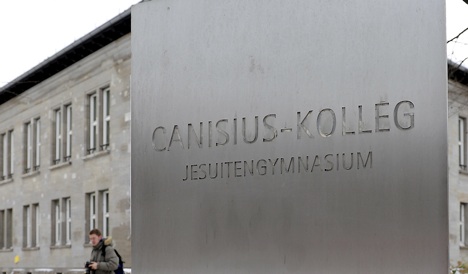 In a statement addressed to his victims, the former sports teacher Wolfgang S. said it was “a sad fact that I abused children and young people for years under pseudo-educational pretexts.” He said there was “no excuse.”

The confession follows revelations on Thursday that dozens of students had been abused in the top Berlin school in the 1970s and 1980s.

The school’s headmaster Father Klaus Mertes sent a letter to some 600 former students at Canisius College who may have been victims of at least two priests on staff. “With deep shock and shame, I have learned of these horrific, not only isolated, but systematic violations that went on for years,” wrote Mertes, before adding that both priests left the school in the 1980s.

“The weight of the incidents overwhelmed me,” he told the Berliner Morgenpost newspaper. “I have promised the victims full discretion. They are free to go to the public or the police.”

The 65-year-old man Wolfgang S., currently living in South America, claimed that he had informed his Jesuit superiors of his criminal past in 1991.

The current Jesuit provincial leader confirmed to the news magazine Der Spiegel that the order did know of Wolfgang S.’s crimes, and has hired a lawyer “to ascertain what the Jesuits specifically knew at the time, and what steps were taken.”

S. reportedly left the brotherhood in 1992, and is suspected of having abused young boys at other Jesuit schools in Germany before then, but he did not comment on this. He also taught at Jesuit schools in Hamburg and the Black Forest region, and claimed that the Vatican had been aware of his crimes.

The second suspect in the Canisius case is the 69-year-old former religion teacher Peter R. from Berlin, but he has denied all charges and is unavailable for comment.

In recent years isolated reports of abuse surfaced, Mertes said. But after an internal document about the abuse was recently sent out, more former students came forward. Their stories convinced him that the abuse had taken place systematically over several years.

The Canisius College is one of just three private Jesuit schools in the country and has educated well-known economic and political leaders.