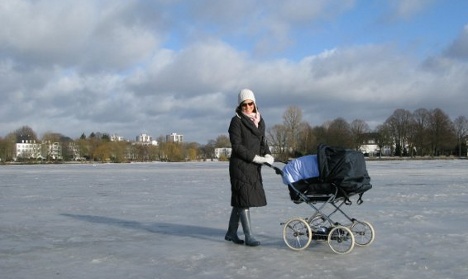 It’s not every day you see a man with a bike in the middle of a canal in the northern port city of Hamburg – particularly one on his hands and knees, taking a large hammer to the ice separating him from the freezing cold water below.

A middle-aged woman clad in a substantial amount of fur grumbles that it is too dangerous to walk on the canals, that warm water beneath the ice is thinning it out. Paying her no attention and having satisfied himself that it is indeed thick enough, the ice-cyclist clambers back on his bike and pedals off. Shaking her head, the woman announces that she’s off to the Alster, Hamburg’s picturesque inner-city lake.

“I walked on it yesterday,” she says proudly.

A hundred metres or so down the road, groups of Hamburgers are happily sliding, skating and cycling across its wide, frozen expanse. Ten-year-old Jörn Bahnsen has come down with his grandparents to try out a pair of skates he got for Christmas.

“Our grandson is to blame for us being here today,” laughs his grandfather. “It’s very exciting for him because this is his first experience of the Alster being frozen. We were here back in 1997.”

A once-in-a-decade phenomenon, the freezing of the Alster is something reverentially discussed in living rooms, offices and bars around Hamburg each winter. In 1997, the ice was thick enough for the city to hold a giant party on the lake, complete with Glühwein and sausage stands.

This year, northern Europe’s bitter cold winter has formed an 18-centimetre-thick skin of ice across the lake. That’s enough for the city’s environmental authorities to give the green-light for the public to walk on the lake, but not the magical 20 centimetres needed to allow tens of thousands of people to gather for an official party.

“We first stepped on the Alster on Monday,” says Julia Hüppe, skating across the lake with ten-year-old son, Sebastian, who’s riding his BMX bike. “We were a bit scared at first, but it was fine.” The only peril facing either of them this sunny afternoon is slipping over in the slush that has developed on the surface after a slightly warmer morning in the city.

Further along sitting on a pier, packing up their skates for the day are Kathrin Hübner, and her teenage son, Max. They have been to the lake every day this week and neither had worries about venturing out on the ice. “If it had been seven or eight centimetres, then maybe,” says Kathrin. “But when it gets to 18, you know it’s totally safe.”

Drawn to the novelty of the experience she says she also loves “how you get a different view of the city and how there is so much space all of a sudden.”

Out on the ice a young woman pushing a pram casually wanders along while a father pulls his children on their sled. Judging by the smiles on their young faces, it’s fair to assume they’ve joined a whole new generation of Hamburgers with their own big freeze to reminisce about.