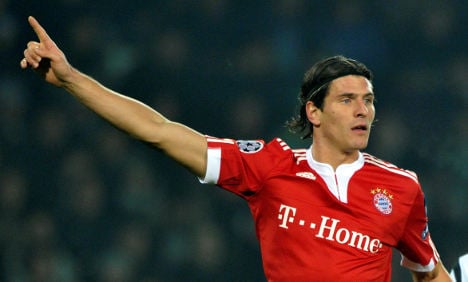 Bayern is second in the table, two points off leaders Leverkusen who host

Having let a 2-0 lead slip to a 2-2 draw against Bochum last weekend, third-placed Schalke will be hoping to take advantage of Hoffenheim’s slump in form when the sides meet on Saturday. The fate of this season’s Bundesliga title could well be decided when Bayern visits Leverkusen on the second weekend of April, but until then Gomez says Bayern must keep winning.

Louis van Gaal’s team suffered a shock when they were beaten 2-1 at Mainz last August, but with Bayern locked in a fierce battle with Schalke and Leverkusen, Gomez says only consistent victories will put them on top.

“I think we’ll need to win nearly all our games to take the title,” said Gomez, who is set to travel to June’s World Cup with Germany, with 15 league games left to go.

Mainz beat Hannover last weekend to pick up their first Bundesliga win in seven games, but Bayern boss van Gaal will want three more points though his side has won all of their last eight games.

Bayern has a good chance of making the Champions League’s quarter-finals as they play Fiorentina in the last 16 next month, but the men from Munich are focused on the German league for the time being.

“The only thing which can stop us now is ourselves,” said midfielder and rising star Thomas Müller, who was called into the Germany squad for fitness testing last week.

But unbeaten Leverkusen continues to resist Munich’s march up the standings from eighth place after 12 matches.

“Bayern has overtaken us twice but we’ve hit back on both occasions. We’ve shown real durability,” said Toni Kroos, who is on loan from Bayern to Leverkusen.

The Rhineland outfit have earned a reputation for dramatic losses of form in the second half of the campaign, but Bayern doubts that will happen this time.

“Leverkusen is playing consistently well right now. We need to focus on ourselves and win our matches, and success will follow automatically,” said Bayern goalkeeper Joerg Butt. “We have to keep winning, and see how the others react.”

Munich was at the top of the league for 26 hours last weekend.

“What matters is being first in May,” said Butt. “And it’s all still in our own hands.”