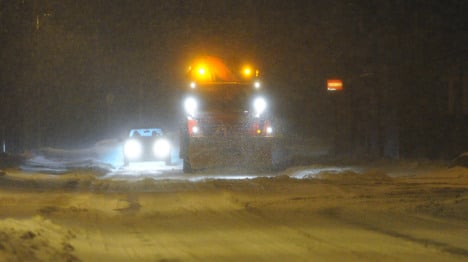 The white stuff caused the most problems for truck drivers, who struggled with icy patches and numerous accidents. Meanwhile snowploughs and other cleanup vehicles had difficulties getting through to where they were most needed.

Five transport trucks were involved in a pileup on the A9 motorway near Jena in the state of Thuringia, after they lost control on the ice and spun into one another, police reported. One driver was killed and the accident blocked all three traffic lanes towards Berlin.

Just 10 kilometres away another man died in an accident that involved three trucks and two cars.

High winds in the Uckermark region in northeastern Germany buried truck drivers between Strasburg and Pasewalk in snow drifts, and some roads remained closed on Thursday morning.

Further west in the Ruhr region, the A1 motorway was closed for several hours overnight after a truck driver flipped his vehicle while driving at high speed on the icy autobahn. Another truck driver was unable to stop in time and collided with truck, and the cleanup was slow.

In the port city of Hamburg an aerial contact wire for trains collapsed due to the snow, forcing Deutsche Bahn to close the heavily used line between the main train station and the Dammtor station. This caused lengthy delays for regional connections.