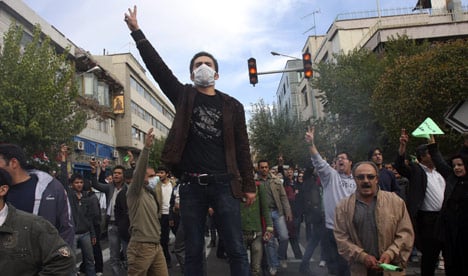 “Two German diplomats using fictitious names of Yogi and Ingo were arrested” during the Shiite commemoration of Ashura, the state television website quoted an unnamed deputy intelligence minister as saying.

“Yogi and Ingo were the two German diplomats whose role in the Ashura incidents has been established by the Islamic republic of Iran,” the official said in a separate ISNA news agency report.

The agencies did not specify whether the diplomats were still detained, but German officials dismissed the reports.

“No German diplomats were arrested on December 27 last year,” German Foreign Ministry spokesman Andreas Peschke told a press conference in Berlin. “If the accusations turn out to have been made, we reject them categorically.”

At least eight people were killed on December 27, when tens of thousands of opposition supporters protested against President Mahmoud Ahmadinejad in what turned into the bloodiest clashes since his disputed June 12 re-election.

Ahmadinejad’s victory triggered protests that shook the pillars of the Islamic republic, which in turn singled out Western powers for fomenting the unrest and expelled two British diplomats.

A few days after the Shiite commemoration, Iranian officials revealed they had detained a Swedish diplomat for 24 hours on December 27, the final day of the Ashura ceremonies. And earlier this month Tehran’s chief prosecutor Abbas Jafari Dolatabadi said a German citizen was detained and later freed, apparently in connection with the Ashura riots.

In Wednesday’s reports, the deputy Intelligence Minister said Iran would “diplomatically protest to the German embassy in Tehran through the Foreign Ministry.”

The official alleged unidentified German diplomats set up a network of young Iranians to collect information on events in the country, adding members of this network had also been arrested.

A close adviser of main opposition leader Mir Hossein Mousavi was identified and arrested, and had “confessed that he was a spy,” he said “Available evidence and this person’s confessions show that he was connected through a pointman to the intelligence service of a European country and was releasing confidential information.”

Meanwhile, German industrial giant Siemens said on Wednesday it would stop signing new business deals in Iran from mid-2010 amid growing tensions between Berlin and Tehran.

“The board has decided not to conclude new contracts with commercial partners in Iran,” company spokesman Alexander Becker told AFP, adding a decision had already been taken to this effect last October.

“There are clients that have offers on the table that expire by mid-2010 at the latest … from this date onwards, there will be no new business,” added the spokesman.

Germany is one of the world’s leading exporters to Iran, although pressure to roll back dealings with the regime in Tehran has grown as the international community mulls sanctions over its disputed nuclear programme.

Chancellor Angela Merkel said Tuesday that German-Iranian trade had “declined considerably” while acknowledging that the two countries had a “long tradition of economic cooperation.”

In 2008, German exports to Iran, mainly machine tools and industrial equipment, rose by nearly nine percent despite international condemnation of the regime in Tehran.

For her part, Merkel warned that time was running out before the international community considers sanctions, adding that February would be the “crucial month” in the UN Security Council.

Sanctions on Iran would only work if applied “over the broadest possible basis,” Merkel added, following talks with Israel’s President Shimon Peres. Berlin has already reduced to a trickle the special export guarantees crucial to companies trading with Iran.

In addition, according to press reports, the government is applying pressure on chambers of commerce not to organise seminars on Iran or business trips to the country.