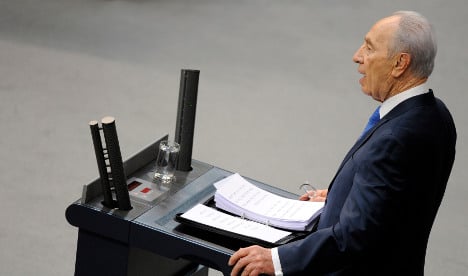 Speaking in Hebrew to mark International Holocaust Remembrance Day, Peres, who won the Nobel Peace Prize in 1994, also shared with lawmakers childhood memories of his grandfather, who was burned alive by the Nazis.

“Survivors of the Holocaust are gradually departing from the world of the living … at the same time, men and women, who took part in the most odious activity on earth – that of genocide – still live on German and European soil, and in other parts of the world,” he said.

“My request of you is: Please do everything to bring them to justice.”

Germany has recently stepped up its pursuit of those who carried out the slaughter of some six million Jews before during the Second World War. A high-profile trial of John Demjanjuk, an 89-year-old accused of pushing 27,900 men, women and children into the gas chambers, is expected to wrap up in May.

Peres, now 86, said he could still remember his grandfather’s voice as an 11-year-old being put on a train to escape the horrors of the Nazis.

“I remember his poignant embrace. I remember the last words and the order I heard from his mouth: ‘My boy, always remain a Jew’.”

“I continued watching my grandfather until he disappeared from sight. That was the last time I saw him.”

The president’s grandfather was forced into a synagogue in modern-day Belarus with the rest of the Jewish people of his village and the building was torched.

“The only remains of the whole community were embers. There were no survivors,” Peres said.

Dressed in a sombre suit and wearing a traditional skullcap, Peres led standing officials including Chancellor Angela Merkel in an ancient Aramaic prayer in memory of the six million Jews who perished.

Turning to current issues, Peres reiterated his belief that Iran “is a danger to the entire world” and that Israel was “prepared to relinquish territories to achieve peace with the Palestinians.”

“I believe that peace is attainable,” the president stressed.