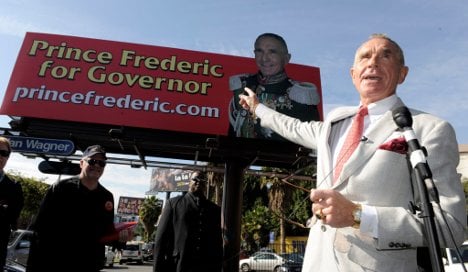 The 66-year-old, who acquired his title through adoption by Princess Marie-Auguste von Anhalt in 1980, is calling his campaign “Return to the Good Life.” His website promises a “sin tax” for the legalisation of marijuana and prostitution, the opening of the Mexican border, lower vehicle registration fees, legalisation of gay marriage, and an end to the Cuban cigar ban.

“I’m the only governor who will keep his promises,” he told journalists recently.

The son of a German police officer who is not officially recognised by the rest of the Anhalt family, the candidate has rented a large billboard on Sunset Boulevard featuring his likeness in full royal German regalia and the phrase “Prince Frederic for Governor.”

He will have to gather 10,000 signatures to appear on the candidate list for the election in November.

Though he is no stranger to the limelight, having claimed to be the father of playboy model Anne Nicole Smith’s daughter Dannilyn in 2007, the prince said he was nervous to make his first appearance as a political candidate.

“I almost peed my pants,” he said. “It’s something totally new, and I’m getting critical questions. I’m no big politician, but I said if Arnold can do it, then so can I.”

Anhalt added that California’s current governor, Austrian-born Arnold Schwarzenegger, is to blame for his own low popularity rating for ignoring “the little man.”

The candidate said that California should stop importing products it produces at home, like avocados and wine, but insisted that the “small pleasure” of Cuban cigars be allowed into the country once more with the addition of a tax.

He also said that he’s found campaign sponsors through friends of his wife Gabor (92) and in Las Vegas.

“We estimate that it will reach $10 million by the election,” he said.