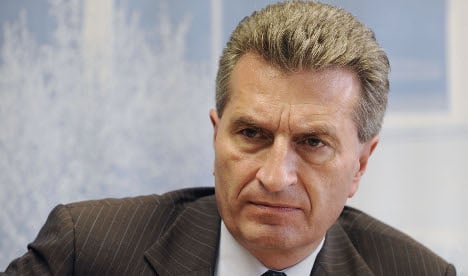 Watched almost a million times on YouTube already, the video shows Oettinger, the outgoing premier of the state of Baden-Württemberg, emphasising the importance of English in his new capacity as commissioner for energy issues in Brussels.

But then it cuts to the conservative politician attempting to give a recent speech in English – to largely unintelligible effect. In some passages, Oettinger appears not to understand what he’s saying himself and he begins to omit challenging words and phrases.

Chancellor Angela Merkel’s decision to nominate Oettinger to the European Commission originally sparked considerable criticism since the provincial state premier had little experience in international affairs. But he managed to win over some sceptics earlier this month by competently handling his confirmation hearings by the European Parliament. That questioning, however, took place in German.

Ironically, Oettinger’s home state of Baden-Württemberg is famous for its thick Swabian accents and the region’s motto is: “We can do anything – except speak High German.”

The online parody comes only a few months after German Foreign Minister Guido Westerwelle faced derision for his own shaky English skills.

Westerwelle refused in September to answer a BBC reporter in English, but told him they could meet for “a fabulous tea” afterward.