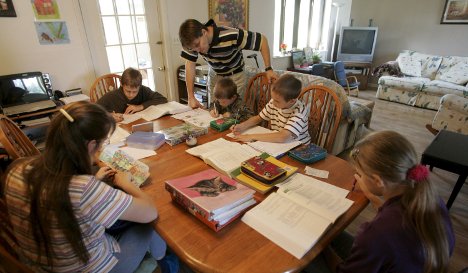 The Romeike's learning in Tennessee in April 2009. Photo: DPA

An immigration judge in Nashville, Tennessee ruled that parents Uwe and Hannelore Romeike, and their five children, are free to stay in the US, where they have been since 2008, news agency AP reported late on Tuesday.

The parents, who came from the state of Baden-Württemberg, allege they were persecuted for their faith and defiance of Germany’s compulsory school attendance since those who do not comply face fines and jail time.

According to Uwe Romeike, his family was fined the equivalent of some $10,000 over two years, but could not afford to make payments after their court appeals failed.

“I think it’s important for parents to have the freedom to choose the way their children can be taught,” Romeike told AP, later adding that German curriculum was increasingly “against Christian values.”

In October 2006, police forcefully took the family’s children to school in their home town of Bietigheim-Bissingen when they refused to do so themselves. One year later, the country’s high court ruled that in some similar cases the state could take children from their parents.

“We knew we had to leave the country,” Romeike, whose case was represented by the Home School Legal Defense Association, told the news agency.

The US government could appeal the court’s decision to allow the family to remain in Morristown, Tennessee. But advocates for the Romeikes on Wednesday celebrated their victory.

“This decision finally recognises that German homeschoolers are a specific social group that is being persecuted by a Western democracy,” Mike Donnelly, a lawyer for the Home School Legal Defense Association, said in a statement.

“It is embarrassing for Germany, since a Western nation should uphold basic human rights, which include allowing parents to raise and educate their own children,” he said. “We hope this decision will cause Germany to stop persecuting homeschoolers.”

But German consul general for the southeastern US states Lutz Gorgens told AP in an email that German parents have a variety of choices, among them religious schools, which helps to maintain the country’s educational standards.

However, proponents of homeschooling have not been placated by the chance to have their children attend religious educational institutions.

In November 2009, another Christian couple was fined by a Kassel court for refusing to send their children to school.

The couple from the Hessian village of Archfeld bei Herleshausen has seven children between the ages of two and 17, who they told the court they had hoped to “give the Bible their unlimited trust” through lessons at home.

But after the trial concluded, the parents did not say whether they would obey the court’s orders.