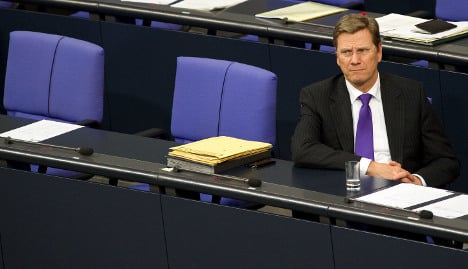 In September the FDP garnered 14.6 percent of Germans’ votes, but they have since lost almost five percentage points to reach just 9 percent in an opinion poll conducted by news magazine Stern and broadcaster RTL.

The FDP has been subject to increasing criticism after reports the party took a donation of more than €1 million from a single donor – a baron whose company will profit from the reduction in value added tax on hotel bills recently enacted by the new government.

The FDP’s coalition partners, the conservative Christian Democrats (CDU), gained one point in popularity to reach 36 percent, the Stern-RTL-Wahltrend showed.

Manfred Güllner, who led the poll conducted by research institute Forsa, told Stern that some of the FDP’s supporters had turned to the CDU, while others chose to abstain from backing any party.

The opposition centre-left Social Democrats, who lost their place as junior coalition partners in September’s election, earned 21 percent of the poll participants’ favour.

And the environmentalist Greens reached a new record high in popularity – 16 percent. Güllner attributed their newfound support to a large reservoir of disappointed SPD voters.

Supporters of the socialist Left party, currently embroiled in bickering over new leadership after party head Oskar Lafontaine stepped down due to illness, remained at 11 percent.

The other smaller opposition parties received 7 percent of the vote.