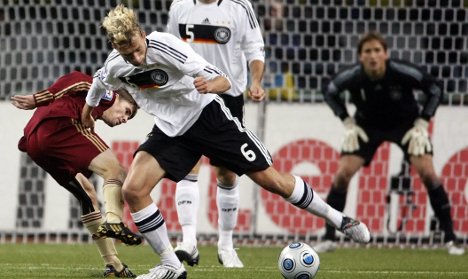 Rolfes, 28, had been complaining of knee pain for several days and Germany medical staff recommended he go under the knife after he met up for a squad get-together.

“It’s a shock for all of us as Simon has always performed very well foir the national team, notably in the decisive group qualifier against Russia,” said Löw.

To date Rolfes has won 21 caps, having pushed veteran Torsten Frings into the background, but he now faces several months on the sidelines.

Löw also revealed that seven-time Formula One world champion Michael Schumacher would attend the squad’s World Cup training camp during May to help with motivation.

Schumacher, who is a friend of striker Lukas Podolski, is set to show up some time between May 21 and June 2, when the squad will be fine-tuning preparations for South Africa at Appiano in the Italian Tyrol.

“Michael Schumacher is an idol and a hero for many of the players. We’d all like to see people come in from other sports to hear them talk on how they work and prepare themselves,” said Löw.

“Schumi,” who just turned 41, is returning to the racing circuit next season with the new Mercedes GP team after three years away from the sport.

He was to have met up the players Monday at the Mercedes team launch in Stuttgart but the plan fell through.