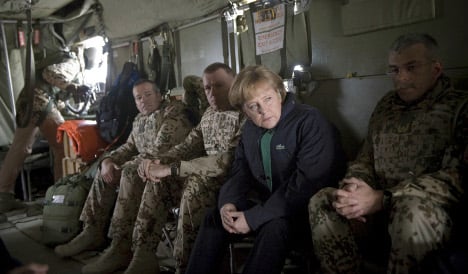 There Merkel and the ministers plan to finalise their list of priorities for Germany’s participation in the Afghanistan conflict and development – to be presented by Westerwelle on Thursday in London.

Details of Germany’s Afghanistan policy reportedly remains unclear, and it has been said that Westerwelle may only present goals for civil contributions in the country, the paper said.

There has also been discussion of doubling development aid from €125 million to €250 million, and increasing the number of police and army trainers from 120 to 200.

But Germany’s American allies have also been pushing for Berlin, which currently has some 4,300 troops stationed in Afghanistan, to send more troops and let them more readily engage in heavy fighting against the resurgent Taliban.

Meanwhile Chairman of the opposition Social Democrats Sigmar Gabriel told broadcaster Deutschlandfunk that German troops should leave Afghanistan at the same time US President Barack Obama has said his troops will begin pulling out – 2011.

“If President Barack Obama says that the US will begin withdrawing troops in 2011, then that is also the beginning of withdrawal for the Bundeswehr,” he told the station.

Gabriel also said he was against sending more German troops to the Hindu Kush mountain range on the border with Pakistan.

“If we intensify combat operations, that means more civil victims,” he said, adding that in general his centre-left party supports German participation in NATO operations in Afghanistan.

Gabriel’s comments came ahead of an SPD conference on Afghanistan with international experts in Berlin.