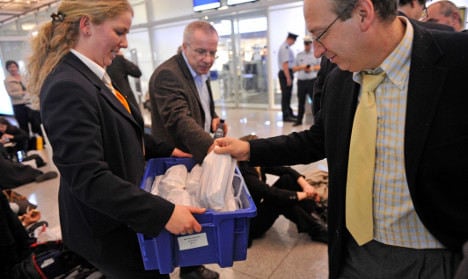 “When one is conducting a check, one should also be able to hold the subject,” he told the paper.

And while the exact course of events that led to a massive police operation at the airport on Wednesday afternoon is still under investigation, it was likely coloured by the fact that either the security stations had too few search counters available, or the workers were not well-trained, Scheurig added.

The man who reportedly ran away from a security station after workers suspected traces of explosives on his laptop remains at large after the bomb alarm sent some 1,000 police officers to secure and close parts of Terminal 2, a federal police spokesperson said on Thursday.

Police gave the all-clear signal on Wednesday evening, and one spokesperson said that the passenger that sparked the security alert around 3:30 pm may have just been a businessman in a hurry to catch his flight.

The fourth floor of the terminal, used for flights within Germany and Europe’s passport-free Schengen Area, was evacuated and all docked planes were stopped. About 100 flights were delayed or cancelled during the alert.

Police were unable to comment on the passenger’s nationality.

Meanwhile a spokesman cautioned that the scanner could have been set off by harmless chemicals such as perfumes.