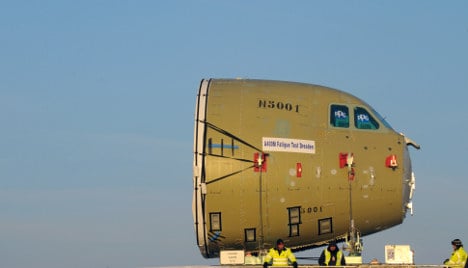 He also pulled back from the previous intention of making four A380 superjumbos a month, scaling down the target to two a month.

“We already know today that the weak dollar alone will weigh on our results by around a billion euros,” Thomas Enders said in an interview with the Hamburger Abendblatt daily.

“I’m not dreaming of four A380s a month. Our next objective is two machines every month,” he said.

The pessimistic outlook and reduced ambition comes after the seven client nations for the company’s military transport plane the A400M, said they were not going to remain committed to the project at any price.

He said the firm, battered by the global economic slump that has hit airlines hard, would need “a few years” to return to profitability, but added, “It’s not going to take decades.”

Enders has threatened to scrap the A400M unless seven NATO countries that have ordered it – Germany, Spain, France, Britain, Turkey, Belgium and Luxembourg – stump up more money.

The latest round of talks on the troubled project, which is three years behind schedule and an estimated €11 billion over budget, is due to take place in Berlin on Thursday.

Enders has warned that should the project be cancelled it could hurt the financial viability of all of Airbus, which employs 52,000 people around Europe.

The seven client nations have ordered a total of 180 A400M planes at a cost of around €20 billion, but the project has been plagued by setbacks and is expected to cost up to an additional €11 billion.

Representatives from those countries met in London last week, promising continued commitment, but a statement from Britain’s defence ministry said this was “not at any price.”