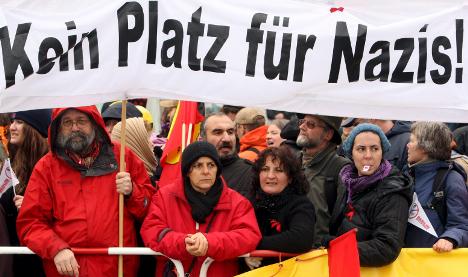 These Berliners will be happy. A file photo of an anti-fascist march. Photo: DPA

A new clause in rental contracts will ban such meetings from public buildings, and enable city officials to enter rented rooms and end meetings should their content be unacceptable.

The clause was agreed during a conference of the 12 Berlin district mayors on Monday and announced in a statement. Lichtenberg district mayor Christina Emmerich of The Left party, said such measures were generally taken in her constituency, but that there was now formal agreement between the districts to pull together.

The mayors said they would also take measures to try to sensitise private landlords to the subject of far-right extremism and encourage them not to rent their properties to clothing shops or pubs with a far-right clientele.

“We will publicise the relevant clause and notify landlords of this opportunity,” said Gabriele Schöttler, Social Democrat mayor of Treptow-Köpenick district.

Bianca Klose, head of the mobile advice against far-right extremism project in the capital, welcomed the move and said the district councils could play a key role in the fight against fascism.