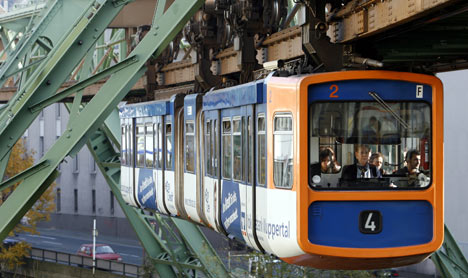 “I cannot even get a loan to buy a new fire engine,” frets Johannes Slawig, Wuppertal’s city treasurer.

Like his colleagues across Europe’s biggest economic power, Slawig has been scrambling to find budget savings in the face of a dire shortfall. Street lamps go off at 10:00 pm, indoor public pools are one degree cooler this winter to save on heating bills, and “dog trackers” are fanning out across nearby Aachen to pester owners about paying their “canine tax.”

Wuppertal, in the German state of North-Rhine Westphalia, plans to hike the dog tax and the price of burials, shutter a theatre housing a stage used by the late homegrown choreographer Pina Bausch as well as pools and elementary schools, and trim the social service budget. Hit hard by the economic crisis -Germany’s worst since the war – municipalities say they are also under siege from a tax-cutting drive in Berlin that has robbed this city of 350,000 people of millions in revenue.

The prospects are particularly gloomy for Wuppertal, which boomed in Germany’s post-war industrial heyday, and now suffers unemployment of more than 11 percent. Even a key source of pride, an elevated metro, was out of service for several hours on a recent frigid day while its streets were caked with muddy snow.

An austerity plan, unveiled at the end of 2009 by city hall “will have negative effects on everyone’s daily life,” Slawig admitted. He fears it will impinge on quality of life here in ways large and small, likely sparking a flight of the wealthiest, which will only exacerbate the revenues crunch.

“I already pay €2,500 per year for my daughter’s pre-school while it is free in Düsseldorf,” the more prosperous state capital, says Philipp Thelen, a 30-something father of two. “So if I move one day, I will go where it’s free and where there are still swimming pools that are open.”

Thelen is not only worried about his own belt-tightening. He runs a centre that offers language courses, child care and tutoring to mainly immigrant families in a particularly run-down neighbourhood of the city and worries its public funding, which accounts for three-quarters of its budget, may dry up.

He speaks of “sleepless nights” and wonders which members of his staff he can keep on salary and which services he can continue to offer. In cities such as Wuppertal, the decline of industry began a quarter-century ago but gathered pace with the financial and economic crisis over the last year, which Slawig blames for about half the public deficit here.

In other cash-strapped urban centres, the crisis has hit like a bombshell, stripping their coffers of millions in commercial taxes, their main source of revenue.

Merkel’s government pushed through a controversial stimulus package of €8.5 billion in tax relief from January 1, and it plans much larger cuts in the coming years.

In Wuppertal, Slawig says up to €8 million in expected revenue will simply dry up this year, forcing cutbacks for its citizens.

“What the state gives away in the form of tax cuts it takes back by making people pay more for everything,” he said.