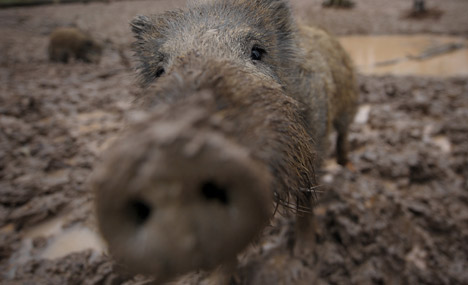 The pugnacious pig bit three people who were walking through a Grunewald area park in Berlin’s western Charlottenburg-Wilmersdorf district. Police were first alerted to the boar at 10 am when a man called emergency services to say he’d sustained a bite to his leg in the wooded park.

An hour later Berlin’s 110 service got a call from a 56-year-old woman who said her hand had been bitten by a boar and she had warded the savage swine off with her Nordic walking poles.

At this point police dispatched a city hunter to track down the ornery creature, but he was unable to find the boar before another victim, this time a 32-year-old woman, called emergency services to say a boar had bitten her hip around 3 pm.

Just five minutes later the hunter finally put an end to the the boar’s furor.

“All three of them were able to seek their own medical attention and no one was seriously injured in the attacks,” police spokesman Burkhardt Opitz told The Local.

Opitz said that police “definitely got the right pig” and that people should not worry about similar attacks in Grunewald.

“It’s a forested area and there is the occasional wild boar that lives there, but its very rare that we get a call about any sort of attack – even more so in the winter,” he said.

Upon examination, authorities found that the pig had an old bullet wound in his rump, probably caused by another hunter.