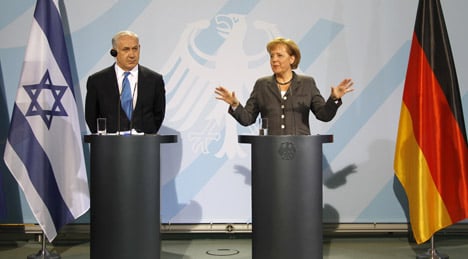 The gathering of the two governments, the second ever after a similar meeting in Israel two years ago, will address urgent security issues such as Iran and underline the strong bond forged in the wake of the Holocaust.

The trip is “designed to strengthen and expand the cooperation between Israel and Germany. There is a very special relationship between Berlin and Jerusalem,” Regev told AFP.

The leaders, along with five Israeli ministers and their German counterparts, will also visit the Holocaust Memorial near the Brandenburg Gate during the Israeli delegation’s day-long stay in Berlin. Defence Minister Ehud Barak and Foreign Minister Avigdor Lieberman were among members of Israel’s centre-right cabinet joining the premier.

Media have widely reported that Israel has ordered a sixth Dolphin-class diesel submarine from Germany. Israel currently has three Dolphins and has confirmed it ordered two more.

The submarines are believed to have a range of 4,500 kilometres (2,800 miles) and the capacity to launch nuclear-capable cruise missiles. “We attach great importance to our ties with Germany because of their economic and political impact and mainly because of Israel’s security,” Netanyahu told reporters ahead of his trip.

Germany is playing a leading role in efforts to broker a prisoner exchange between Israel and the Islamist Hamas movement for an Israeli soldier held by Palestinian militants in the Gaza Strip since 2006. The joint cabinet meeting was initially planned for November but was postponed because Netanyahu came down with a viral infection. Merkel and several of her ministers had made a similar visit to Jerusalem in March 2008.

Meanwhile Avi Primor, the former Israeli ambassador to Berlin, on Monday called on Germany to back an international security force to ensure peace and stability in the Middle East.

The initiative would attempt to fill the power vacuum in the West Bank should Israel ever end its occupation there as part of a peace deal with the Palestinians, Primor told the daily Berliner Zeitung.

He said Germany would not necessarily have to send troops to the region, but that Berlin needed to take the political responsibility for its creation.

“It would have to be a fighting, robust force that could ensure security in the West Bank while working with the Palestinians naturally,” Primor told the paper.

“It wouldn’t have to be Bundeswehr soldiers or entirely European. Decisive would be who has taken on the political responsibility, who stands behind it. It has to be a political power.”

Primor said he hoped German Chancellor Angela Merkel would back the creation of such a security force, but did not expect anything to come from German-Israeli consultations in Berlin on Monday.

“Certainly nothing official,” he said. “But behind the scenes the Germans could grab the initiative and ask the Israelis how they could help solve the security problem, which is the central issue blocking the peace process.”

The former ambassador said German support was key to European efforts in the Middle East. “It’s up to them,” he said. “The French are prepared to do it. The Germans are reluctant.”