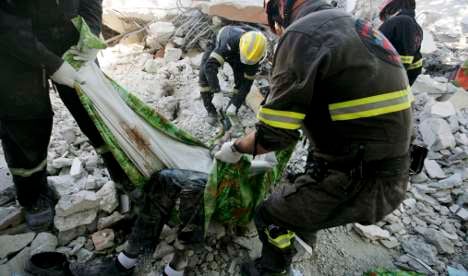 Another victim pulled from a collapsed building. Photo:DPA

Westerwelle also confirmed the first German to have died in the Haiti disaster and said another 30 are still missing in the chaos that followed last week’s earthquake in the country.

The Bild am Sonntag newspaper reported that the dead man was a 28-year-old identified as Christoph R. who worked for a Hamburg export company in Haiti.

He had been in the Montana Hotel, a spot popular with Europeans that is set on a hill on the outskirts of Port au Prince. It is thought he was on the terrace of the hotel when the quake struck. His body was found and identified by a woman in contact with his family in Hamburg who had begged her to try to find him, the paper said.

Meanwhile workers from the Johanniter accident aid organisation arrived on Sunday with a large delivery of basic medical equipment and supplies over the weekend, aiming for a large hospital in Port au Prince which had only been slightly damaged in the quake but has nonetheless been overwhelmed by the situation.

A plane carrying a mobile hospital, three all-wheel-drive vehicles and 200 crates of medical supplies, as well as several volunteers and a doctor, left Berlin for Haiti on Saturday, according to the German Red Cross (DRK).

The mobile hospital has the capacity to treat up to 250 people a day in a system of seven tents which can be erected within a day, DRK spokeswoman Svenja Koch said.

A dispensary filled with medications, as well as a kitchen tent, water tanks, toilets and an electricity generator completes the self-sufficient hospital. The flight and supplies are worth around €800,000, Koch said.

The earthquake, which registered at 7.0 on the Richter scale and destroyed large parts of the capital Port au Prince, a city among the most impoverished and crowed in the world, is the worst disaster the United Nations has ever addressed, the organisation said.