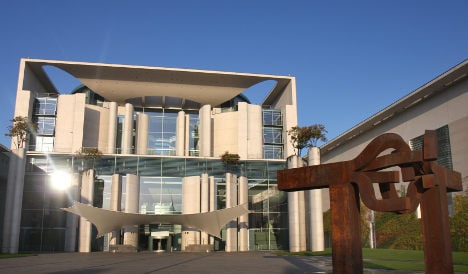 Workers have already started work to tackle the problems, while Merkel has started working from a different room in the building according to the Der Tagesspiegel newspaper.

The €250-million chancellery was finished in 2001, but since then a catalogue of problems have required repairs. A former site manager told the paper the enormous building is “full of cracks.”

The underground garage leaks and many other walls are considered to be in bad condition. Carpets in the 12,000-square-metre building have already been replaced after the floor buckled slightly when the air conditioning system was switched on.

Meanwhile maintenance workers have known for some time that the sprinkler system was not installed properly.

Merkel had to leave her office briefly in 2008 when window panes were replaced in the balcony area.

“There are defects throughout the building,” the former site manger said.

Two years ago it was also noticed that holes had been left in the ceiling of the library after plans to make alterations were abandoned.

“The move from Bonn to Berlin took place really quickly,” the paper’s source said. “The government buildings were then urgently needed, and a proper handover was done without.”

A spokesman for the chancellery said they were conducting a legal inquiry into whether the building companies could be held responsible for the continued problems. Such lawsuits are generally allowed up to five years after a building is completed, but in certain cases a court can extend that time limit.

Serious problems have been identified in another five new government buildings in Berlin over the last few years – and millions have been spent on repairs.

The upper house of parliament, the Bundesrat, had a leak, while a large piece of ceiling in the Foreign Ministry collapsed, and the façade of the Paul Lobe building where MPs have their offices, drooped by three centimetres, which led to shattered windows.