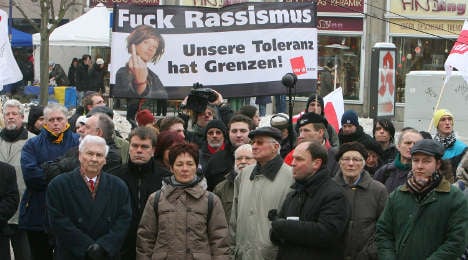 Around 1,000 neo-Nazis had secured permission to march through the town to supposedly mark the deaths of the thousands killed in the bombing raids of January 16, 1945.

“The neo-Nazis who today make as if they are grieving for those Germans killed in the air raids perpetuate the sowing of hatred for other people and different ways of thinking,” said Interior Minister for Saxony-Anhalt Holger Hövelmann.

He said it was a provocation and an insult to all victims of the war that neo-Nazis should march on such an anniversary.

Some of those opposing the neo-Nazi march tried to stop it, attempting to break through police lines. A police spokesman said that 1,200 police officers were on hand and used truncheons at times to keep the neo-Nazis and their opponents apart. Eleven people were arrested.

In 2009 more than 100 associations, volunteer organisations, church groups and other parties joined forces to organise the “Mile of Democracy” for the first time to oppose the annual neo-Nazi march.