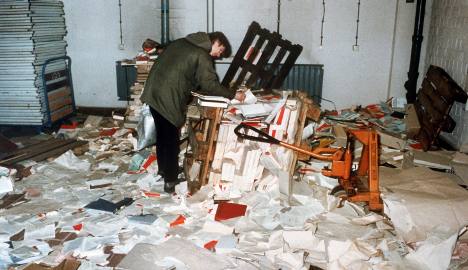 A man looks through files in 1990. Photo:DPA

The fall of the Berlin Wall and the liberalisation of political debate that preceded just a few months before had already put the East German state on notice – but taking over the Stasi headquarters was a crucial step in dismantling the police state.

Marking the 20th anniversary, Marianne Birthler, head of the authority which administers the files, said the day was one of joy and making amends.

She praised the East Berliners who had taken over the Stasi without violence, recognised the worth of the millions of files, and protected them. Many had already been shredded by Stasi officers keen to hide their transgressions, but most were preserved.

The Stasi was enormous even by the standards of the socialist bloc of the Cold War, employing 91,000 people and using a further 189,000 unofficial informants. Up to 7,000 people worked alongside boss Erich Mielke in the huge headquarters in Berlin’s Lichtenberg district.

The BtSU, commonly known as the Birthler Office after archive head Marianne Birthler, administers the kilometres of files saved from the Stasi offices in Berlin and other major former East German cities. Without the files, it would be impossible to systematically assess the East German dictatorship, Birthler said on Saturday.

“What happened is important for the present and the future,” she said, adding that the files not only contain many instances of betrayal and espionage, but also many examples of brave people who stood up against the government. “These stories deserve to be preserved,” she said.

Interest in the files remains high, and the BtSU received nearly 103,000 applications to see personal files last year, many more than in 2008. “Many people seem to have needed to create a safe distance as they were scared that it would be painful to see their files,” Birthler said last week.

The authority was founded in 1991 to preserve and research the enormous archive for details on how the state functioned. It also provides individuals with access to their files, and has so far conducted nearly 6.5 million private searches.

Monika Grütters, chair of the parliamentary culture committee said the work must not be limited and warned against creeping justification and down-playing of the past.

“The need for reappraisal of the past is as urgent today as ever before,” she said.