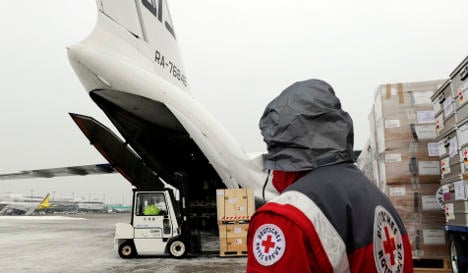 The hospital equipment is loaded onto a plane in Berlin on Friday Photo: DPA

The mobile hospital has the capacity to treat up to 250 people a day in a system of seven tents which can be up and ready to function within a day of a location having been found, Svenja Koch, spokeswoman for the DRK said.

A dispensary filled with medications, as well as a kitchen tent, water tanks, toilets and an electricity generator completes the self-sufficient hospital. The flight, and supplies it will take, has cost around €800,000 Koch said.

The German government made €1.5 million in emergency funds available on Thursday, and send an investigative team from the agency for technical relief (THW) to try to assess the situation.

Many hospitals on Haiti collapsed in the earthquake near the capital city Port au Prince on Tuesday. The situation on the Caribbean island is increasingly horrific, with tens of thousands expected to have died, many more injured and traumatised, almost completely without infrastructure in large parts of the capital.

Reports suggest thousands of bodies have been trucked out of the city to a mass grave as efforts are made to prevent disease further increasing the death toll.

US Secretary of State Hillary Clinton is expected to visit Haiti on Saturday, while United Nations Secretary-General Ban Ki Moon will arrive to see the situation on Sunday. Initial estimates that at least $550 million will be needed to take care of the estimated three million people affected by the earthquake.

As governments and aid organisations around the world send missions to Haiti, the biggest problem to have emerged is the state of the airport, small to begin with and damaged in the quake.

Several planes loaded with aid, rescue equipment and helpers have been turned back from the airport as there was no space to land.

The US government has been given control over air traffic control and says it can deal with 90 flights a day on the one still functioning runway.

The Port au Prince harbour was so badly damaged in the quake that it is not useable at all.

The Haitian government is drawing up plans to survey badly-hit areas of the capital and tear down buildings deemed too dangerous to leave standing, in the light of the danger of further aftershocks.

Haiti was one of the world’s poorest and most desperate countries even before it was hit by the quake. It occupies the western part of the island of Hispaniola – the other side is the Dominican Republic, a far wealthier country and favourite holiday destination for many Europeans including Germans, and which does not seem to have been affected by the earthquake.