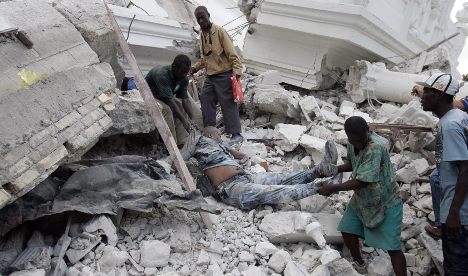 Another €500,000 will be provided for food, the ministry said. The funds will be made available to German non-governmental aid organisations to provide clean water, food and medical aid to victims of the quake, which measured 7.0 on the Richter scale when it struck on Tuesday afternoon.

A four-person investigative team from the Federal Agency for Technical Relief (THW) is already en route to assess the situation in and around the capital of Port-au-Prince, just 15 kilometres away from the earthquake’s epicentre.

Reports coming out of the area say that thousands of buildings collapsed and the has city descended into chaos. Experts have said there is no way to know how many were killed and injured in the disaster, though some estimates have ventured as high as 100,000 dead.

“We are grieving together with the people of Haiti for the victims,” Foreign Minister Westerwelle said in a statement.

A second THW team of drinking water experts is scheduled to depart on Thursday, in addition to a mobile hospital from the German Red Cross to leave on Friday.

Westerwelle has spoken with the German ambassador to Haiti, but said he could not be sure whether any Germans were killed in the disaster.

“Unfortunately I cannot rule it out,” he said at a press conference.