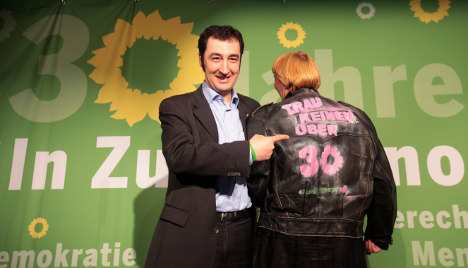 The Greens have grown up. A ragtag anti-establishment outfit when founded on January 13, 1980 in Karlsruhe, the party has become a respected member of Germany’s political system over the past three decades.

During that time, the Greens also fundamentally changed German politics. They have traded their self-knitted wool sweaters for sharp suits and are now anything but a one-issue party focused solely on the environment.

“In the beginning we were written off as a bunch of crazy wackos, with Birkenstocks and muesli,” said Greens co-leader Claudia Roth. “One of the most important points is that we’ve put ecological questions on the agenda.”

Click here for a photo gallery of the rise of the Green party in Germany.

The party is gaining members, votes and political potential as German lifestyles become “greener” and more environmentally conscious. People from all walks of life buy organic foods, separate their rubbish for recycling and use electricity from renewable energy sources.

And their success has led the country’s other four main parties to co-opt traditionally Green issues. Even Chancellor Angela Merkel’s conservative Christian Democrats like to champion causes such as the fight against global warming these days. The trend has left the smallest opposition party in parliament searching for its own political space and has spurred some of the younger, more left-wing Greens to demand the party return to its radical roots.

Max Löffler, head of the Greens’ youth organisation, complains the party leadership is stifling internal dissent and discussion for “fear the party is going to be torn apart.”

The legendary MP Hans-Christian Ströbele, one of the founding members of the party, also laments the Greens have become “too established” and tame. “I wish the image of the Greens would be a bit more colourful and alternative, like it was in the beginning,” he said recently. “We should practice the forms of protest we did in the past.”

However, Roth said the party has learned they must be willing to compromise after the often “painful” experience of taking on political responsibility in city councils, state coalitions and the federal government over the years. The Greens have even agreed to state-level coalitions with Merkel’s conservatives in Hamburg and Saarland – much to the chagrin of many party supporters.

But with their traditional coalition partner the centre-left Social Democrats floundering across the country, the activists once dismissed as tree-hugging hippies have learned they have to adapt to survive.

And Greens’ parliamentary group leader, Renate Künast, said it was inevitable the party would not stay the same as it was 30 years ago.

“We’ve changed society,” she said. “And that has changed us.”