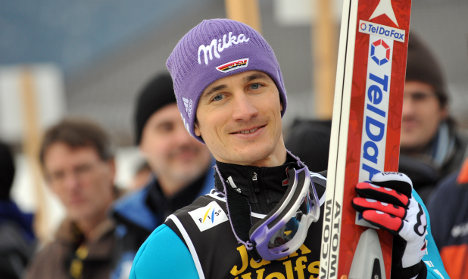 After earning a disappointing 21st place at the Four Hills Tournament this season, Schmitt said he would not compete in World Cup events for several weeks.

“The fact that I am not fit right now is a result of being at the (lower) limits of my weight for years – one has to walk a tightrope walk to avoid negative effects in jumping,” Schmitt told daily Bild on Tuesday.

The 31-year-old, who has jumped with gold and silver Olympic medal teams, told the paper he would have to gain four kilogrammes to feel healthy again.

“That would be a weight with which I could train well without feeling weak each time,” he said.

On Monday, his coach Werner Schuster had told the television show Blickpunkt Sport that the ski jumper would take the time to get back into form ahead of the Vancouver winter Olympics in February.

At 1.82-metres (six-feet) tall, Schmitt weighs just 63 kilos (138 pounds) and eats just 1,300 calories per day when preparing for competition – about half that recommended for a man of his size, not to mention one participating in vigorous training. But the athlete said that any more weight would make him uncompetitive.

“If this wasn’t my weight, then I wouldn’t jump as far. For example, if I weighed two, three kilos more, I would lose five to six metres in distance. No skier in the world can make up for that,” he said.

Schmitt told the paper that he hoped the International Ski Federation (FIS) would raise their Body Mass Index (BMI) regulations. The current rules, already roundly criticised by Finnish ski jumper Janne Ahonen, stipulate that the height to weight ratio must be 20.0 including a skier’s suit, helmet and shoes. While the FIS has said it plans to increase the low limit to 20.5 next season, Schmitt said they should aim for 21.0.

“Ski jumpers would still be really thin,” he said.