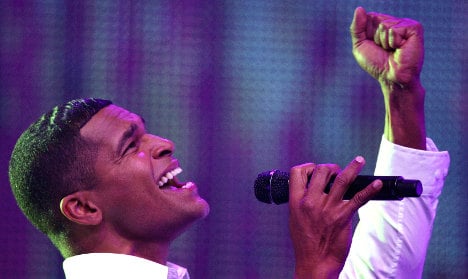 An actor rehearses his role as Obama for the musical. Photo: DPA

The stage Obama will perform a duet with First Lady Michelle and lead a gospel chorus singing “Yes, We Can,” his trademark slogan of optimism and change, in a bi-lingual production entitled “Hope – The Obama Musical Story.”

Producers said they hope to take the show to the United States.

“I had the initial idea right at the start of Obama’s electoral campaign,” US writer and composer Randall Hutchins told the online edition of German magazine Der Spiegel. “I found the atmosphere exciting and that was my inspiration. People hoped change would result in a better life. It was a beautiful, very social time.”

Although Obama’s domestic approval ratings have fallen, the US president remains popular in Germany where a November poll found 44 percent named him as their political role model, well ahead of former chancellor Helmut Schmidt.

With a predominantly US cast, the show is said to celebrate a non-political quest for a better future. Plans are being laid to take it to other cities around Germany.

During the show, Obama’s Republican presidential rival Senator John McCain and his colourful running mate Sarah Palin perform numbers of their own, the latter rocking with fishnet-clad go-go girls.

Even the audience will get a chance to join in, organisers said, with seats equipped with a percussion-sensitive surface that lets them drum along with the beat.

“If everything works fine, we would like to plan a tour in the States as well,” organiser Patrick Strese told AFP.