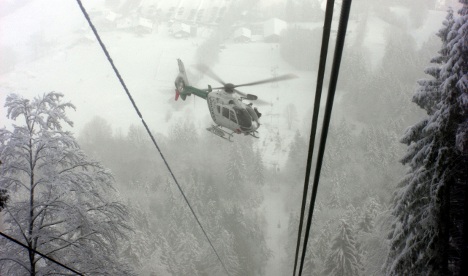 A snapshot of the rescue operation taken by a skier in the gondola. Photo: DPA

The Brauneckbahn lift near Lenggries ground to a halt around 9:30 am when the emergency brake inexplicably engaged. As a result, passengers in several of the four-person cars got an invigorating lesson in helicopter rappelling instead of skiing powder runs.

“This was a first for me,” Upper Bavarian police officer Franz Sommerauer said. “It’s naturally not a daily occurrence for a gondola to stop, but there are rescue plans and the mountain emergency service also works regularly with resorts on this kind of thing.”

More than 100 police, fire department, mountain rescue and Red Cross workers joined forces to extract all of the gondola passengers without injury in about two hours – well under the time estimated for the rescue.

Five police helicopters hovered above the lift as mountain rescue workers dropped down to the cable cars, where they then hooked passengers up to harnesses and ropes so they could rappel to the ground or be lifted into the aircraft, depending on the terrain below.

“Naturally a few people were a bit scared, and the Red Cross set up counselling measures for this, but besides a cup of hot tea it wasn’t really necessary,” Sommerauer said, adding that most of the passengers, aged between 10 and 66, were hardy mountain locals.

Skier Peter Gutmann, who was riding alone in a gondola car when it stopped, told news agency DPA that he was unfazed by the 20-metre rappel trip to the ground.

“I’ve lived through more dangerous situations,” the 40-year-old said. “I’m a parachuter and a ski teacher – an extreme freak.”

News magazine Der Spiegel reported on its website that the emergency brake likely engaged due to a damaged gondola car, but police spokesperson Sommerauer told The Local that officers have not yet determined a cause.

He added that the investigation was ongoing and would be attended to by the technical inspection association TÜV and the state’s “ski lift commissioner.”