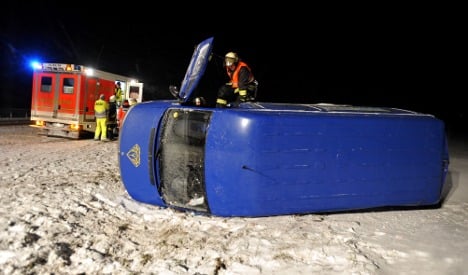 Rescuers on the A7 near Tarp in Schleswig-Holstein. Photo: DPA

A 22-year-old man was killed on the B1 in the state of North-Rhine Westphalia near Lippe when his car spun out of control on a patch of ice and collided with a tractor trailer laden with 22 tonnes of wares. He died at the scene of the accident and the road was closed in both directions for several hours during cleanup efforts, police there said.

Meanwhile on the A2 motorway near Hannover a truck driver lost control and crashed into a central barrier, overturning the truck. The accident blocked all lanes of traffic, but another car failed to see the truck in time and a second collision ensued. The road in the direction of Berlin was closed for hours while rescue workers removed debris.

Click here for The Local’s photo gallery of the winter storm.

Ice, snow and broken branches kept the A19 between Rostock and Berlin closed until late on Monday evening, but the A20 between Gützkow and Greifswald toward Rostock/Lübeck was only passable by late Tuesday morning, the state interior ministry said.

In Schleswig-Holstein on the A1 a driver spun out of control, crashing into a road barrier. His truck was damaged and leaked some 600 litres of diesel fuel into the ground, while the driver was trapped in the vehicle and injured, police said.

In the same northern state, where residents have been hit particularly hard by heavy snowfall and high winds, there were three accidents on the A7 – including one that involved a police cruiser. An officer was at the scene of another accident when his vehicle was hit by a 40-tonne beverage truck. The truck overturned and its contents spread across the motorway, requiring a lengthy cleanup operation, police reported.

In much of the country, particularly in the north, residents are still working to dig out after winter storm “Daisy” dumped heaps of snow that cut off Baltic island villages, closed schools, delayed trains and flights, and left roads impassable despite round-the-clock efforts by road crews.