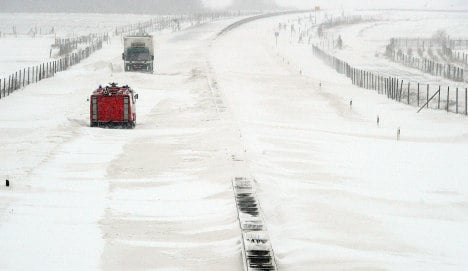 In Mecklenburg-Western Pomerania hundreds of drivers were trapped in their cars on the A20 motorway between Gützkow and Jarmen over night, with snow reaching up to their windows. Rescue services could not reach them until the morning.

Around midday on Sunday a convoy of some 30 cars were led to safety by snow clearing vehicles from the motorway services at Peenetal to an exit at Greifswald.

The situation in the state of Schleswig-Holstein was described as catastrophic in places, with villages across the northern coastal region, and on the islands of Rügen, Fehmarn and Usedom, cut off from transport completely on Saturday. Some areas also reported sporadic electricity black-outs.

Many roads in Lower Saxony, Saxony Anhalt, Brandenburg and Berlin were also blocked by snow drifts and fallen trees.

A passenger train travelling from Straslund via Pasewalk to Berlin became stuck in a snow drift near Ducherow, according to a spokeswoman for Deutsche Bahn. The 14 people on board were stuck for several hours while rescuers trudged through snowy fields to reach them.

Ferry services between Rostock and Sasnitz to Sweden and Denmark were cancelled on Saturday due to high winds.

Snowfall of 29 centimetres in Leipzig, 27 centimetres in Berlin and 12 centimetres in Hamburg, caused complications for travellers across the country. Some 255 flights to and from Frankfurt airport were cancelled on Saturday, while another 61 were already cancelled by 10:30 am on Sunday.

Snowfall should die down by the end of Monday, but temperatures are expected to remain below freezing.