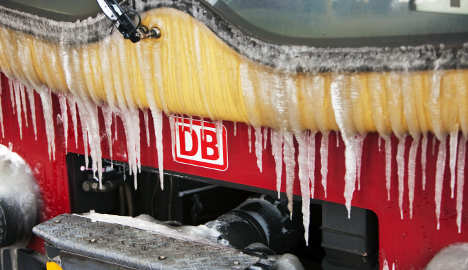 Deutsche Bahn “is incapable of resolving the crisis that it was responsible for creating” by trying to cut costs before an eventual privatisation, city transport head Ingeborg Junge-Reyer said.

Junge-Reyer announced the end of Deutsche Bahn’s monopoly over the suburban S-Bahn network on Thursday, but the change will only come into effect when the their contract finishes in 2017, and thus fails to address current problems.

Buses and the underground, run by another company, continue to operate normally, but suburban trains play a vital role in the city, which covers 891 square kilometres (344 square miles), eight times the size of Paris.

“Maintenance work, checks and refurbishment, plus the disruption now caused by the winter cold, halted a large number of (trains),” a Deutsche Bahn spokesman said.

Ice and snow led to many delays in the past week but the real problem dates back to May when a train derailed, leading to the discovery that line maintenance had not been sufficiently attended to for years.

As a result, services were reduced, some routes were cut back and commuters were left without information or alternatives.

In July, the problem was so serious that traffic was reduced to one train in three and the network stopped serving the city centre for more than two weeks.

Bosses at S-Bahn were subsequently fired.

“We are making fools out of ourselves when we put ourselves forward as candidates to run railway networks abroad, yet we can not even get the trains running in our own city,” a Deutsche Bahn manager, who asked not to be named, said in a Die Welt newspaper report.

Deutsche Bahn, Berlin’s biggest employer, plans to re-open recently closed workshops in a bid to deal with the maintenance problems.

But the difficulties will persist for several months, said Deutsche Bahn’s Ulrich Homburg, whose aim is to “resume normal service on all lines before the end of 2010.”

Deutsche Bahn had previously promised this would be done by the end of 2009.

Last week he added that Deutsche Bahn should compensate commuters, making a rare intervention for a government minister on a local issue.

Deutsche Bahn has already promised users €55 million in compensation, but they may have to dig a bit deeper to satisfy Berliners struggling through the snow this winter.