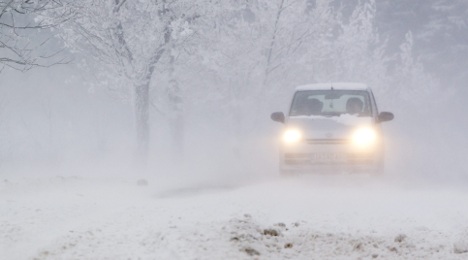 And shortages in road salt and grit are already feared, while the authorities recommended that people consider stocking up with a few days’ worth of food.

The A5 motorway leading from Baden-Württemberg into France was closed on Friday afternoon, leading to a queue of hundreds of lorries building up, with nowhere to go. The road was opened again on Saturday morning, enabling the drivers to carefully proceed with their journeys.

Frankfurt airport was badly affected, with more than 200 flights cancelled on Saturday morning alone, and many more delayed. A plane slid off the runway at Nuremberg airport on Friday evening, causing the airport to be closed for more than two hours while the passengers were evacuated and the plane pulled out of the snow.

Snow drifts more than a metre high in places, along with strong winds and fallen trees, caused problems on the roads on the northern island of Rügen, while some areas in the Harz region saw traffic completely halted due to conditions.

The German weather service said on Saturday that a broad band of snow had fallen from Baden-Württemberg and Rhineland across to Saxony and into southern Brandenburg. The winds were not as strong as had been expected, but still reached produced strong gusts.

Snowfall should be expected to continue during Saturday afternoon and into the night, when the northern coasts should be prepared for strong winds, the weather service said. Sunday will also see continued snowfall across most of the country, only stopping on Monday. Temperatures well under freezing should be expected for at least the next few days.

The federal disaster readiness officials said in a statement people should ensure they have enough food and medicines for about four days, and that they have batteries for torches and radios in case of electricity black-outs.

German nature protection group NABU has recommended that people put out food for birds as the snow and frozen ground is making it particularly difficult for them to find enough nourishment.