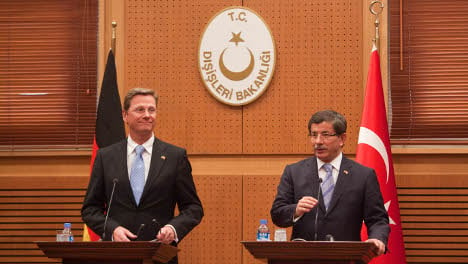 Westerwelle, on a two-day trip to Turkey, dismissed fears that Chancellor Angela Merkel’s new centre-right government was throwing up hurdles for Turkey.

“Some have asked whether the new German government wants to close the door to (EU) membership for Turkey,” he told a conference of Turkish ambassadors. “I will tell you quite clearly: what the EU and Turkey have agreed stands. And that applies to this German government too. I am committed to that.”

Merkel’s conservative Christian Union would prefer to see Turkey granted a “privileged partnership” with the EU while Westerwelle’s pro-business Free Democrats are seen as more open to Ankara’s ambitions.

Westerwelle, who is also vice-chancellor, quoted from the October coalition pact in which Berlin pledges its support for “open-outcome” accession talks with Turkey.

Asked later at a press conference with his counterpart Ahmet Davutoglu whether his statements meant Merkel had dropped her opposition to Turkey eventually joining the EU, Westerwelle said he spoke for Berlin.

“I am not here as a tourist in shorts – I am the German foreign minister and what I say counts,” he said with a smile. “We are reliable partners. That is why Germany has such a good reputation in the world.”

He noted that Turkey had as yet failed to meet key EU criteria such as opening its borders to member country Cyprus but also called on Nicosia to contribute to a solution, and praised Ankara for its democratic reforms.

“I encourage you to press on,” particularly in the areas of freedom of religion, expression and the press and its treatment of the Kurdish minority.

Westerwelle hailed Ankara’s “key role” in trouble spots such as Iraq, Lebanon, Afghanistan and Pakistan and efforts to heal long-standing rifts with neighbours such as Armenia.

“And we of course plan to implement all the necessary EU reforms,” he said.

The glacial progression of EU accession talks has been a major source of frustration for Ankara.

The island of Cyprus has been divided since 1974 when Turkey occupied the north in response to an Athens-engineered coup in Nicosia aimed at uniting the island with Greece. Ankara has since 2004 refused to open its frontiers and ports to Cyprus under an EU-Turkish accord.

Since it began EU accession talks in 2005, Turkey has managed to open 12 of the 35 so-called chapters and successfully negotiate and close just one.

On top of its row with Cyprus, there is a bigger, more fundamental issue, raised by EU powerhouses France and Germany and others: whether such a large, mainly Muslim country on the borders of Asia has a place in Europe.

Westerwelle was also to meet Prime Minister Recep Tayyip Erdogan and other government ministers on trade ties, Iran’s nuclear programme, the stability of Afghanistan and the threat posed by Al-Qaida in Yemen. President Abdullah Gul cancelled planned talks due to illness.

After meeting with Kurdish politicians, Westerwelle was to travel to Istanbul before continuing on to Saudi Arabia, Qatar and the United Arab Emirates.