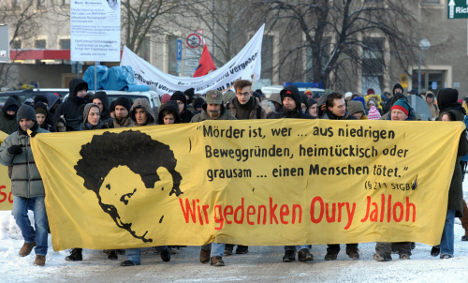 The presiding judges found that a December 2008 decision by the Dessau-Roßlau regional court to acquit a 47-year-old police officer of bodily harm with fatal consequences was flawed.

On January 7, 2005, the 23-year-old Oury Jalloh allegedly set fire to a mattress with a cigarette lighter while his hands and feet were shackled to a jail cell bed. State prosecutors said he could have been saved if police had acted fast enough to get him out of the cell.

The 47-year-old officer and a 44-year-old colleague said they had tied Jalloh’s hands and feet because he had been violent after being arrested for drunkenly harassing women. When the fire alarm went off they allegedly turned it off several times before checking the jail cell.

But the chain of events could not have happened as it was presented during the trial, the court ruled on Thursday. Judges were unable to determine whether Jalloh set the fire himself, or how it would have been possible to do so, calling it a “substantial gap in the consideration of evidence.”

“There is a circumstance described that is difficult to comprehend,” said Ingeborg Tepperwien, one of the BGH judges who reviewed the case.

The Magdeburg regional court will now take up the case to determine whether the senior officer was at fault for Jalloh’s death, which sparked outrage among human rights activists in Germany.

Break the Silence, an initiative formed by a network of human rights groups to clarify Jalloh’s death, staged a demonstration on Thursday in Dessau for the fifth anniversary of his death.

“Our organisation believes believe that Oury Jalloh was murdered and we hope for the opportunity to prove this,” Osaren Igbinoba, an activist for one of the initiative’s founding groups, The VOICE Refugee Forum, told The Local on Thursday. “We will continue to build solidarity so that these people are convicted for what they did.”

The initiative also has plans for an independent commission to review the case, he said.

Director of the Initiative for Black Germans (ISD) Tahir Della, who has also supported the appeal of case to the high court, told The Local that the group believes judges made the correct decision.

“There were so many inconsistencies and retracted statements – which the judge himself also said during the trial,” Della said.

“It’s absolutely necessary to get the truth about what exactly happened that night. It’s clear that the officers at the scene did not do their duty to protect their prisoner – and there must be consequences.”