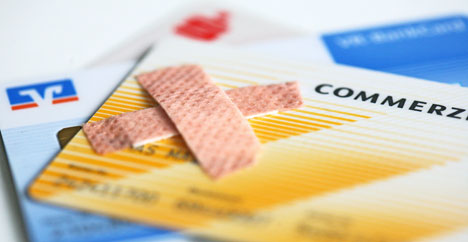 A day earlier, Klem had tried to buy food and found herself with a full basket and no way to pay for it after her bank card failed to work as normal. “Everyone was looking at me at the check-out,” she said.

The problem stems from computer chips in the cards being unable to cope with the changeover to the year 2010, leaving millions of Germans starting the new year unable to withdraw cash or to pay with plastic in shops.

The situation has since improved at cash distributors, with bank staff working overtime to reprogramme their software, but payments in shops and supermarkets are still subject to glitches.

“Sometimes cashiers get cards to work by wrapping them in plastic film before inserting them into the payment terminal,” Klem noted.

The problem was a reminder of the feared “Y2K” bug of a decade ago that had governments, businesses and individuals expecting the worst at the turn of the millennium. In the end, everything went smoothly.

This time around, German banks believed they will be able to re-program the defective bank cards via automated teller machines so as to avoid the cost of replacing them, estimated at €250 million to €300 million. Lawyers will probably have to decide whether it is the banks or the card makers who foot the final bill.

The French firm Gemalto, a major supplier of bank cards, said it and banks were mounting a joint effort to develop “a corrective process that avoids the replacement of the affected cards.”

Around one third of all German credit and direct debit cards, known as “electronic cash” or EC cards, are believed to have been hit by the bug. Germans trying to make purchases abroad have also experienced difficulties and the German association of savings and regional banks DGSV has said it might take until Monday to fully resolve the problem.

Union in Germany, as saying: “We have seen a marked increase in transactions”

with clients who want cash for business or holiday trips.”

Back in Berlin, “the situation is not extreme,” said Kerstin Haertel at the Thalia bookstore chain before adding: “There are always problems with cards.”

Fortunately, Germans prefer to pay in cash anyway. A recent central bank study found almost 58 percent of all transactions handled that way, compared with about 30 percent for all bank cards combined.