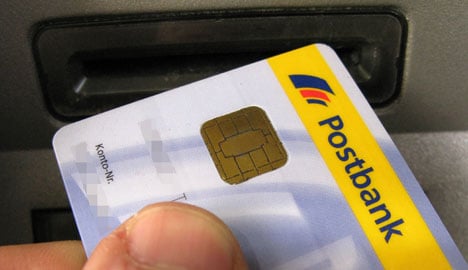 The problem that hit cardholders using cash machines or making payments throughout Germany and abroad stems from computer chips unable to recognise the year 2010, and could take up to a week to resolve, the DSGV savings and regional banking association said in a statement.

A global alert had gone out 10 years ago amid widespread fears of a similar problem, dubbed Y2K for the year 2000.

More recent cards that contain a computer chip designed to provide extra security have been affected while older ones with just a magnetic strip on the back appear to work normally.

DSGV said around 20 million “electronic cash” (EC) cards, also known as “girocards,” and 3.5 million classic credit cards issued by its members had been affected. EC cards are direct debit instruments which do not allow owners to buy on credit.

The world’s biggest chip card maker, the French group Gemalto, is the cause of the problem, two German newspapers, Handelsblatt and Cologne’s Stadt-Anzeiger, reported on Wednesday.

The private bank association BDB said some 2.5 million of its cards had been hit, and the BVR association added that four million cards issued by Germany’s cooperative banks had also been partially touched by the problem.

Around 93 million EC cards currently circulate in Germany, where cash is also a widely used form of payment.

Among the country’s private banks, a Commerzbank spokeswoman said just some of its cards had been affected and that many of its machines had already been adapted to accept those in question, but did not provide detailed figures.

Postbank, which has the biggest retail banking network in Germany, declined to say to what extent it had been hit.

“Deutsche Bank clients do not have a problem,” a spokeswoman for the biggest German bank told news agency AFP.

DSGV said that the bug, which it termed a delayed “Year 2000 problem,” should be completely eliminated “by next Monday,” but that “withdrawal restrictions” on some credit cards were still possible until then.

“The use of EC cards and not credit cards is recommended at cash machines until further notice,” the DSGV said, adding that it was “working intensively” to resolve the problem.

Around 25,700 of its machines have been repaired, DSGV said, but roughly one third of all payment terminals in the country were reportedly still affected on Tuesday. German stores are equipped with around 600,000 such terminals.

Payment problems were also reported meanwhile by Germans who were on holiday outside the country.