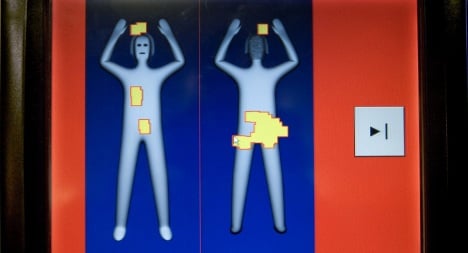 “So far I have not seen a machine that protects personal rights,” Schaar told the paper, adding that the machines must be able to tell the difference between foreign objects and medical prosthetics or implants.

“The improvement that the naked images are no longer visible on the monitors is not enough on its own,” he said.

The failed terrorist attack on a transatlantic flight to Detroit on Christmas Day has reignited the debate in German about the so-called ‘naked’ scanners, which allow security personnel to see through clothing. This week Chancellor Angela Merkel’s conservatives said use of the scanners would be fast-tracked for introduction within the year.

Testing of the devices is planned to begin soon, and federal police say they have developed a version that disguises passengers’ intimate areas – but Schaar said he has yet to see details in response to requests.

Meanwhile German airports have stepped up security in response to the attempted bombing, conducting body searches on all passengers. People travelling to the US are advised to expect longer waits.

Member of Merkel’s Christian Democrats and head of the EU parliamentary committee on legal affairs Klaus-Heiner Lehne said that Europe would legalise the use of the scanners by early summer.

“After the thwarted attack in Detroit we have a completely different situation,” he told daily Neue Osnabrücker Zeitung on Tuesday, adding that the latest generation of the machines is unravelling concerns about privacy.