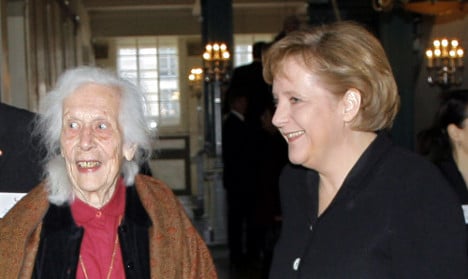 Moltke with Angela Merkel at a Berlin concert in 2007. Photo: DPA

The Cologne-born woman died peacefully among her family on January 1 following a viral infection, her son Caspar von Moltke said.

“She was still alert to enjoy the Christmas holidays and was in full control of her mental faculties until the end,” he said, adding that she will be buried in her adopted country, where she has lived since 1960, on January 8.

A further memorial service will be held in Berlin in March.

Moltke was born in 1911 to the Deichmann family. She married Helmuth James Graf von Moltke in 1931. The couple co-founded the Kreisau Circle, one of Germany’s few anti-Nazi resistance groups.

After her husband was executed for treason in January 1945, Moltke went on to publish his letters and write about the events of that era within the group.

In 1989 her work won the Geschwister-Scholl-Preis, a literary prize named in honour of Sophie and Hans Scholl, two young Germans executed for founding the White Rose resistance movement during the Second World War.