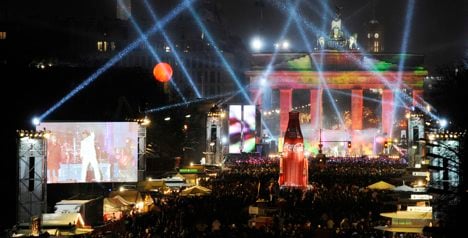 Midnight was marked at the Brandenburg Gate by a ten-minute firework display accompanied by music as the annual televised party reached its climax.

But despite the massive crowds around the Victory Column and the Straße des 17. Juni, which has come to be known as the city’s “party mile” for major public events, police reported few incidents. Around 600 police officers and safety personnel were on hand in the area, and a spokesman said the police was “very satisfied” with the event.

Several hundred thousand party-goers were already at the Brandenburg Gate at 6 pm, where they were entertained during the evening by various musical acts including Dutch singer Loona and British pop duo Right Said Fred.

Apart from the three stages, the 15th open-air New Year’s event at the city’s central landmark included a number of disco tents, over 200 stalls and a Ferris wheel.

Event organisers said that last year’s figure of one million party-goers had not quite been reached. The Red Cross was called 111 times, a significant fall from last year.

But the Berlin fire brigade was called 1,503 times across the city, a similar number of times to last year, but there were only around half as many actual fires. A fire rescue spokesman said this was due to the thick blanket of snow.