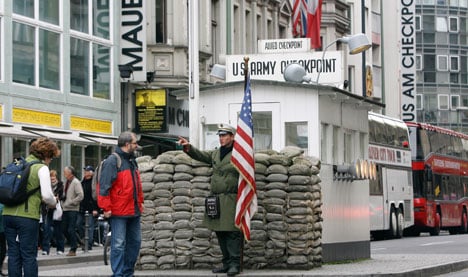 The 120-seat restaurant will be opposite a museum dedicated to the Berlin Wall that used to divide the city, and hopes to be selling its burgers, fries and other products from mid-2010, a spokeswoman told news agency AFP.

The 600-square-metre (6,500-square-feet) location overlooks where Soviet and US tanks famously faced off in 1961.

Spokeswoman Christiane Woerle told AFP said that McDonald’s, which has come to symbolise US capitalism more than any other firm, has applied for planning permission with the German authorities.

Checkpoint Charlie was the main crossing point for foreigners between East and West Berlin from the post-war division of the city until the fall of the Berlin Wall in 1989. After the communist East German authorities erected the Berlin Wall overnight in 1961 as an “anti-capitalist protection barrier,” the crossing point expanded over the decades to include several traffic lanes.

Twenty years after the fall of the Berlin Wall, the city is barely recognisable, having undergone such an architectural metamorphosis that visitors find it hard to tell what was West Berlin and what was East.

The area around Checkpoint Charlie is no exception, with the path of the Berlin Wall now marked by a line of cobblestones and only an open-air gallery showing tourists how the border crossing used to look.

It is a major tourist attraction nonetheless, with coach loads of visitors flocking to buy souvenirs and to pose in photos with enterprising locals dressed as Soviet and Allied soldiers, who also stamp passports for a fee.

The landmark is home to a reconstruction of a border booth behind sandbags as well as a replica white sign informing people they are either leaving or entering the “American Sector” in English, Russian, French and German. Above the hut there is a large photo of a Soviet soldier, and on the other side, as you head south down Friedrichstrasse into the former West Berlin, a US serviceman.

McDonald’s is no stranger to opening in sensitive places, including in the same building as Prague’s Museum of Communism, across the street from Windsor Castle in Britain – and in the US naval base in Guantanamo Bay, Cuba.

In Berlin, the “Golden Arches” logo will adorn a building currently occupied by a myriad of eateries including a sushi restaurant, a kebab outlet, a pizzeria and a Subway all collectively known as “Snackpoint Charlie.”

Berliners on the whole seem pleased.

“I think it’s great,” Alexandra Hildebrandt, who runs the Wall museum, told Bild newspaper. “Checkpoint Charlie symbolises the United States, and so does McDonald’s. They go well together.”

“McDonald’s is definitely a gain for every local and tourist. Because the food here was rubbish,” said Matthias Fischer.