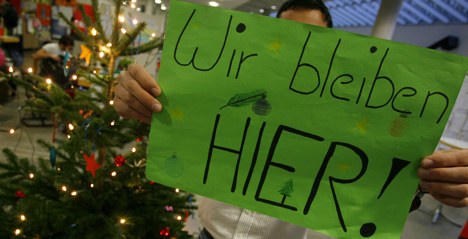 Around 15 students stayed in lecture hall 1A of the Free University of Berlin (FU) on Christmas Day, continuing their protest against the worsening of study conditions and rising fees at German universities.

Another 30 students also continued their sit-in protest in Berlin’s Humboldt University, while around 20 stayed in the Audimax auditorium of Potsdam University. The FU students set up a Christmas tree on Christmas Eve, and cooked themselves meat, dumplings and red cabbage on portable stoves. Some were visited by relatives.

In Potsdam, another spokesperson said, the students ate traditional Chistmas Eve potato salad, and read each other stories during the night.

Many of the occupiers had gone home for the Christmas holidays, the spokesman for the protestors said, but were expected back in the coming days.

Similar sit-ins in other German towns have been forcibly removed in recent weeks, and Berlin students have called a meeting for December 30 to consider a response to what they consider unacceptable action.

Having already agreed a national and European-wide pact of solidarity, the students want to “agree concrete measures to answer the escalation strategy of the university directors,” the spokesman said.

The Audimax in Potsdam has been occupied since the beginning of November. University President Sabine Kunst had called on the students to move into the foyer over the Christmas holidays, in order to give employees a day off, but students refused. University Chancellor Barbara Obst-Hantel said that for security reasons employees would have to work over Christmas if the protest continued in the auditorium through the holiday. She labelled the behaviour of the protestors “anti-social and lacking solidarity”.

The student spokeswoman denied Obst-Hantel’s accusations, saying she could see no difference for staff if they moved into other rooms. The students underlined that they were open to negotiations and ready to hear further offers from university authorities.