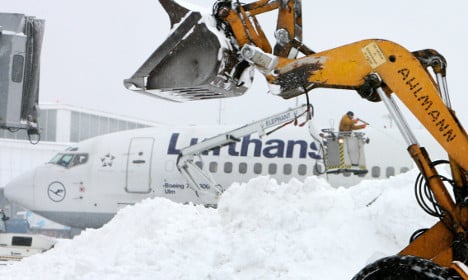 After heavy snowfall shortly before 6am, no flights were able to take off from the Saxony city. Planes coming into Dresden were diverted to Leipzig-Halle airport.

It was estimated that no flights would be taking off or landing before 2pm, the airport said in a statement.

The turbulent and chilly weather, which has caused transport chaos across Europe, including forcing the closure of Frankfurt and Düsseldorf airports in recent days, has also begun to seriously affect train services.

Half the high-speed ICE trains on the busy route between Berlin and Munich were set to be cancelled from Wednesday until Sunday, operator Deutsche Bahn announced. They will run every two hours instead of every hour.

“Unfortunately, we are not able to allocate any replacement trains because everything that can run is running,” DB spokesman Andreas Fuhrmann told broadcaster MDR.

He acknowledged the trains would be “very, very full.” Any seat reservation on a cancelled train would lapse, meaning passengers would have to find standing space on another train, he said.

“For that we are very sorry,” he added.

The reason for the delays stems from extra servicing needs owing to the “long-term effects of the severe frost we’ve had in recent days,” Furhmann said.

Berlin’s airports have also not escaped the chaos. Budget airline Easyjet, which flies out of Schönefeld airport, has cancelled more than 70 flights since last Friday, a spokesman said on Wednesday.

Hundreds of passengers, among them many Italians on their way home for Christmas, were stuck at Schönefeld on Tuesday.

Earlier in the week thousands of passengers were forced to overnight at the Frankfurt airport due to severe winter weather conditions.