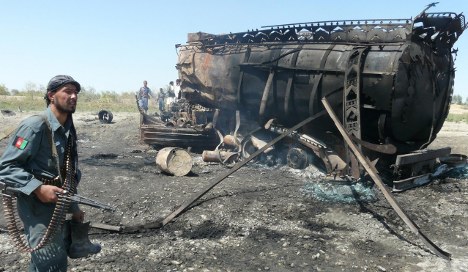 According to the report, the officer, codenamed “Red Baron 21,” was acting on instructions from Col. Georg Klein, who ordered the deadly air strike.

Red Baron 21 knowingly misled the flight control centre that was instructing the two F-15 fighters that carried out the attack, saying troops were in “immediate danger” in order “to make it possible for the mission to go ahead,” the ISAF report said, according to the Frankfurter Rundschau.

But no such enemy contact had taken place. Under the ISAF rules, such an air strike can only go ahead if troops are under fire or immediately threatened. But at the time of the attack, the nearest German troops were nearly eight kilometres away in the Kunduz Bundeswehr field camp. If the report is correct, then the Germans breached the regulations.

The victims of the air strike on two hijacked petrol tankers included many civilians, sparking a political maelstrom in Germany. Franz Josef Jung, who was Defence Minister at the time of the attack, was forced to resign along with Germany’s top soldier Wolfgang Schneiderhahn and senior Defence Ministry bureaucrat Peter Wichert after it emerged the government had falsely claimed no civilians were killed in the attack.

Now there is increasing pressure on Jung’s successor, Karl-Theodor zu Guttenberg, along with Chancellor Angela Merkel, to explain the information debacle that followed the attack. The lower house of the parliament or Bundestag, will begin an inquiry into the government’s handling of the affair in January.

The latest revelations will increase the stakes further.

News magazine Der Spiegel recently reported that Col. Klein turned down the F-15 pilots’ request to do a “fly over” of the two stranded tankers, giving the people on the ground time to flee.

This fact, along with the alleged false claim that German troops had had contact with the Taliban, would mean Col. Klein breached ISAF protocols on air strikes.