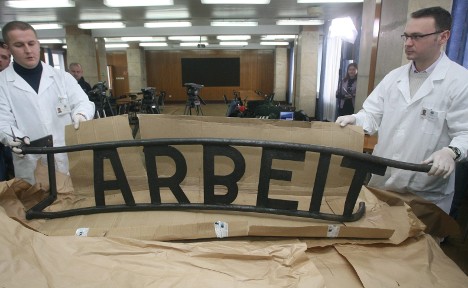 Several Polish media sources cited involvement of a Swedish citizen, who reportedly offered the thieves between €10,000 and €30,000 to commit the crime.

However, police spokesman Dariusz Nowak would neither confirm nor deny the Swedish connection, according to news agency Reuters.

Police arrested five Polish men, at least some of whom had criminal records for robbery and assault, on Sunday night and established they had no neo-Nazi connections, as had initially been feared.

“The question of the mysterious Swede has appeared … I cannot confirm or deny this … Of course they (the five suspects) didn’t steal it to have it in their collection. So it looks more and more that somebody else is behind this,” Nowak said.

He said that “in all likelihood” the sign was stolen-to-order for a collector who “lives outside Poland and doesn’t have Polish citizenship.”

“We have been cooperating with… all international agencies and institutions around the world… It is possible that a person could be detained (on a European warrant),” Nowak said.

On Tuesday morning, the state prosecutor inspected the site of the crime accompanied by three of the suspects, each of whom has admitted to the crime.

The men, aged between 20 and 39, were arrested in northern Poland with the gate, which was cut up into three pieces.

The cynical statement on the sign, which means ”Work shall set you free,” has come to symbolise the tragic fate of the 1.1 million Jews murdered at Auschwitz during the Second World War.

It was crafted by Polish prisoners at the camp in 1940 under order of their German captors. The phrase was also used by the Nazis at other concentration camps.