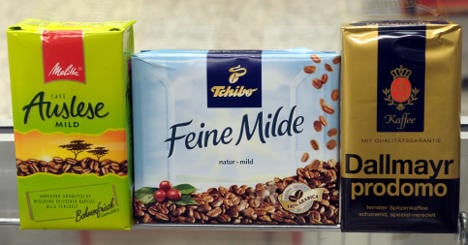 The Federal Cartel Office, or Bundeskartellamt, uncovered multiple instances of “price architecture” going back to the beginning of 2000. The three coffee giants secretly colluded on price hikes, dramatically pushing up the price of filter coffee, espresso, coffee pads and beans.

The fines were imposed on the firms along with six employees involved in the fixing.

Melitta has refused to accept the fine and is in talks with the anti-trust authorities while also preparing an appeal, according to company spokeswoman Annette Kahre.

The firm regrets the incidents and is “taking measures so that something like this didn’t happen again,” Kahre said.

Dallmayr blasted the fines as “totally excessive,” while Tchibo refused to comment.

According to the watchdog, the firms had run a “discussion group” of executives and sales managers over many years, at which they arranged the “timing, length and amount of price rises along with how they would be announced and applied.”

This led to five price-rise agreements between 2003 and 2008, which with one exception – in March and April 2008 – were put into effect in the marketplace.

These were passed on to retailers and eventually to consumers, the Cartel Office office said. In one case, from the end of 2004 to April 2005, this led to a price rise of more than €1 for a 500-gramme packet of roasted coffee.

“The fines are not yet enforced,” the Cartel Office said in a statement.

The firms and their relevant managers could still appeal.

Dallmayr said from its headquarters in Munich: “As everyone can see … coffee is better value in Germany than anywhere else in Europe.”