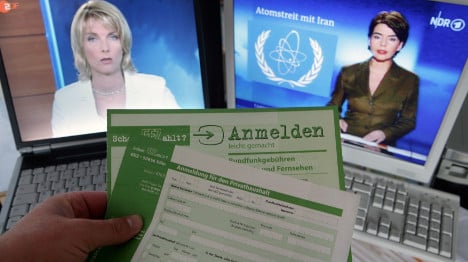 The Brunswick administrative court ruled in favour of a professional translator who refused to pay the fee on a second PC she was using for work and took action against the Hamburg-based public radio station NDR.

The unpopular licence fee is collected by the Fee-collection Centre of Public Broadcasting Institutions (GEZ) on televisions, radios and computers connected the internet.

The fee money funds public broadcasters such as ARD – of which NDR is a subsidiary – and ZDF, and is often collected by plainclothes officials who go door-to-door busting fee shirkers.

The woman had been paying the fee on her other household equipment since 1991. NDR argued she should have to pay an extra fee on her second computer because she was using it for work and it therefore had a separate function.

But the court ruled the fee could only be levied on devices that were specifically set up to receive broadcasting.

A computer has multiple uses and therefore does not fit this criterion, particularly in the case of a work computer, on which radio reception was unlikely to be a function, the court said.

It also pointed out that NDR did not offer unlimited access to its broadcasting on the internet.

The court therefore ruled the fee was illegal on her second computer.

The court further stated that both private and work-related second computers should be free from the fee. The ruling is not yet fully in force because the NDR can appeal the decision in the Higher Administrative Court.

But should this court also uphold the complaint, the ruling could have sweeping implications.

The GEZ currently demands €5.76 per month for an internet-enabled computer, though only if neither a radio nor a television is registered. If the householder pays the monthly fee of €17.98, then all of their communications devices are covered.