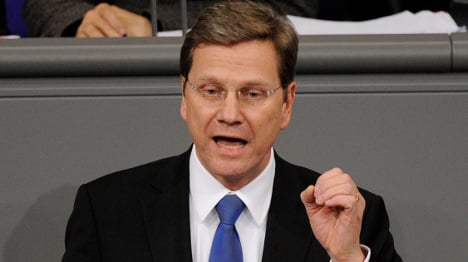 Westerwelle told daily Saarbrücker Zeitung that the upper limit on troop numbers had just been raised from 3,500 to 4,500 and said soldiers were no replacement for civilian reconstruction staff.

And in a sign political opposition to a troop increase is gathering, foreign policy spokesman for the Greens’ parliamentary group, Tom Koenigs, ruled out supporting an increase, saying the Greens in the lower house of the parliament or Bundestag, would not vote for it.

“We need more police in Afghanistan, not more soldiers,” he told the Berliner Zeitung.

His remarks follow comments by the centre-left Social Democrats leader Sigmar Gabriel over the weekend ruling out support for a troop boost. In the past, there has been broad bipartisanship on Germany’s involvement in Afghanistan, with only the socialist Left Party opposing the deployment.

Chancellor Angela Merkel is under pressure from the United States and NATO to commit to sending more German troops to Afghanistan. She had said she would make no decision until after the international summit on Afghanistan due to be held next month in London.

However Westerwelle, who is also Vice Chancellor and leader of the Free Democrats, said that if the planned international conference on Afghanistan in January became an effective summit on troop numbers, there was no point in attending it.

He also confirmed Germany was prepared to make a greater contribution to civilian reconstruction, in particular the training of Afghan police.

Westerwelle went on to call for the immediate establishment of a special prosecutor to deal with foreign deployments, increasing the legal certainty for German soldiers posted overseas.

“We agreed on that in the coalition negotiations and now we should quickly set it up,” he said.

At the moment, the state prosecutor is investigating six soldiers on suspicion of homicide and attempted homicide for the death of a young Afghan and serious injury to two others in an incident at a checkpoint.