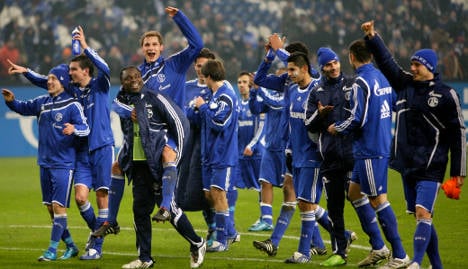 Farfan kept his cool to finish with aplomb and notch his sixth goal of the campaign after taking a neat pass from German under-21 international Lewis Holtby, who, along with his English father, is a staunch Everton fan.

Schalke now have 34 points from 17 games putting them tentatively at the top of the table as they go into the winter break – though Leverkusen will expect to leapfrog them with a victory Saturday at home to midtable Mönchengladbach.

Third-placed Bayern Munich will be hoping to keep up their solid recent run by beating rock bottom Hertha Berlin, which would put them on 33 points.

The 19-year-old Holtby has been making a name for himself in recent weeks with a series of promising showings and again showed his class with his assist.

Holtby is on record as saying that if he graduates to full international football it will be with Germany and not England.

After last week’s away success against fellow high-fliers Werder Bremen the leaders, from Germany’s Ruhr industrial heartland, have been cementing their credentials as genuine contenders for an eighth championship – though their first in half a century.

Indeed, their 1958 success was the only time the Royal Blues – now coached by Felix Magath, who led Wolfsburg to glory against the odds last season – have been champions since the Third Reich era.

Magath, out to win the title with three different clubs as a coach (he won three as a player with Hamburg) was being cautious after his side’s latest success.

“We still lack that killer instinct when we go a goal up. But that one goal was enough. We still have to keep on working,” Magath told reporters.

Bayern, unbeaten in nine games and clicking into form despite being without French star Franck Ribery for more than two months through injury, will look to Germany striker Mario Gomez to score his sixth goal in seven games against struggling Hertha.

The 24-year-old started his purple patch in the 1-1 draw with Leverkusen on November 22.

Leverkusen are unbeaten to date in the league and thus a hot tip to see off Mönchengladbach, meaning Bayern will have to wait until the second half of the season to show they are ready to pounce and reclaim the championship they surprisingly allowed Wolfsburg to poach last season.

At the wrong end of the table, new Stuttgart coach Christian Gross will be without banned Germany goalkeeper Jens Lehmann, who picked up a three-match ban after being sent off in the 1-1 draw against Mainz last Sunday.

Gross replaced Markus Babbel as coach earlier this month, but is still chasing his first Bundesliga success since taking over at Stuttgart as his side, who are 15th in the table, host Hoffenheim on Saturday.