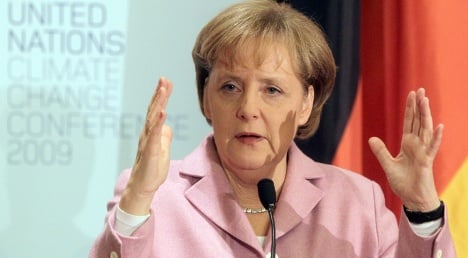 Merkel said she had “mixed feelings” about the statement issued late on Friday by the major players at the conference, who agreed on a need for action without specifying binding mechanisms to actually reduce greenhouse gas emissions.

While Merkel grudgingly signed Germany up to the accord brokered by US President Barack Obama, she said at a news conference later that she had found the decision a “very difficult” one.

“The decision has been very difficult for me. We have done one step, we have hoped for several more,” she said. “The negotiations were extremely difficult and I want to say clearly that I view the results with very mixed feelings.”

However, she said she had agreed to the accord to keep the global greenhouse reduction process going. To walk away would have endangered future talks, she said.

“I reached the conviction that if we were to break off this process, we would have lost years and certainly also created much friction.”

Both Merkel and German Environment Minister Norbert Röttgen pointed the blame for the mediocre result in China’s direction, with Merkel saying the conference had witnessed a “self-assertive China” and adding it had been a “godsend” that Obama was there.

Röttgen said: “We have struggled and grappled. China simply should have brought more to a more internationally binding legal agreement.”

Merkel and French President Nicolas Sarkozy announced that Germany would host a new climate change conference in Bonn around the middle of 2010 to follow up the work of the Copenhagen summit. That will be followed by another conference in Mexico City at the end of 2010.

After two weeks of intense negotiations, which themselves were the culmination of at least two years’ preparation, the conference produced what most observers say was a lukewarm agreement.

The deal fell short of committing any nation to emissions reductions beyond a general agreement to keep the average global temperature rise to 2 degrees celsius above pre-industrial levels – a goal already agreed to in principle earlier in the year.

Some 28 countries eventually signed the accord. But the conference as a whole could only agree to ”take note of” it.

Merkel said that not enough progress had been made for the European Union to boost its commitment to cut carbon emissions. Presently it is committed to cutting emissions by 20 percent by 2020 but had more progress been made, this target could have been increased to 30 percent.

But she said there was no alternative to the UN process if a substantial global accord were to be reached.

She added that “the path toward a new agreement is still a very long one.”

“I will not hide my disappointment,” he said.

But British Prime Minister Gordon Brown was more upbeat, saying the agreement had almost universal support. “Let’s remember, a year ago nobody thought this sort of agreement was possible,” he said.